Pseudogymnoascus destructans, previously known as Geomyces destructans, is a fungal pathogen that causes the disease known as White nose syndrome (WNS)1.  P. destructans is a psychrophilic (cold-growing) ascomycete with an optimal growth range of 12.5–15.8°C2.  This fungus, whose preferable food source is a supply of fats, is often fatal to hibernating North American bats. Evidence of the fungus’ arrival in the United States was first documented in a photograph taken at Howes Cave, 52 km west of Albany, NY during the winter of 20063. 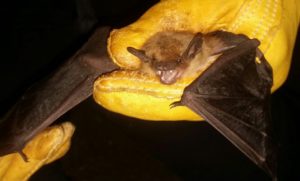