Recent evidence suggests destructans is native to Europe and was only introduced to the U.S. in 2006 (Warnecke et al 2012, Puechmaille et al 2011). Since 2006 when the first cases of WNS were detected in five sites near New Albany, N.Y. the disease has decimated bat populations across the Northeast region of the United States and has killed more than 5.5 million bats (Blehart et al. 2011; FWS, 2014). Recently, WNS has been confirmed in Washington State. A bat was found on a trail and brought in to a rehab facility. It showed signs of WNS and was tested for the disease, and the results were positive for WNS.

European strains may be immunologically or behaviorally resistant to P. destructans presumably because they have coevolved with the fungus (Wibbelt et al. 2010a,b, Puechmaille et al. 2011, Leopardi et al. 2015).  Additionally, the microbial flora of bat skin or other abiotic surfaces in bat hibernacula in Europe may have also coevolved to incorporate P. destructans as a nonpathogenic component of the microbial community (Wibbelt et al. 2010a, b). 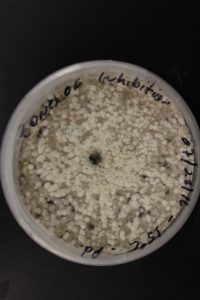